Before Rosa Parks, our National hero memorialized by President Obama in 2013, there was another young woman who stood up to authority and refused to give up her seat on a Montgomery Public Bus, 15 yr old Claudette Colvin. 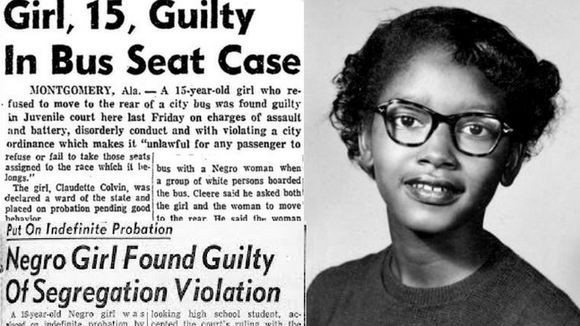 On March 9, 1955 (9 months before Rosa Parks) Claudette Colvin and three other young students boarded a Montgomery Public City bus.  On the course of the trip, Claudette was asked to move back to accommodate white passengers and she refused.  The bus driver was enraged and police met the bus two stops later.

CLAUDETTE: One of them said to the driver in a very angry tone, “Who is it?” The motorman pointed at me. I heard him say, “That’s nothing new . . . I’ve had trouble with that ‘thing’ before.” He called me a “thing.” They came to me and stood over me and one said, “Aren’t you going to get up?” I said, “No, sir.” He shouted “Get up” again. I started crying, but I felt even more defiant. I kept saying over and over, in my high-pitched voice, “It’s my constitutional right to sit here as much as that lady. I paid my fare, it’s my constitutional right!” I knew I was talking back to a white policeman, but I had had enough.

Claudette spent the night in jail and after receiving bail from the minister of her church, she protested the illegality of Montgomery Bus Segregation, reaching the Supreme Court in the case Browder v. Gayle (Gayle was the Montgomery mayor).

While Claudette’s case was quickly eclipsed by Rosa Parks arrest 1 December 1955, her actions helped to start the 381 day boycott of bus service following Ms. Park’s arrest – a boycott that crushed Montgomery’s Public transit system revenue and ultimately led to the elimination of segregation on buses.  Ms. Parks was an experienced civil rights leader, and meeting Claudette Colvin inspired her decision to stay put. 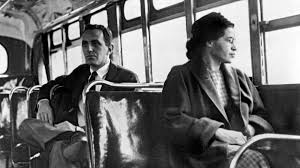 President Obama said the following for Rosa Parks, but it really should be attributed to Claudette, “In a single moment, with the simplest of gestures, she helped change America and change the world.”

It just goes to show how much courage can impact others.  #bethechange @themilieux