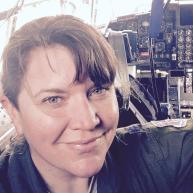 This is a personal post, and may be a bit emotional.  But emotional for good reason.  I see and feel people and situations beyond the surface…at times with a bit more empathy than I would like.  Maybe it is because I’m a woman, maybe it is because I was raised in a small town in Wisconsin, and maybe it is just because I care.  The night before I was to take command of a 140 member squadron, one with the primary mission of enabling training and employment for combat search and rescue units, I was…emotional.   A bit of self-doubt, some concern about “am I good enough to lead these great men and women”, and a lot of “will I make the right decisions?”  Someone I respect greatly had a very simple answer for me that night:  “Don’t command afraid.”   This became the foundation of my years in command as I was determined to follow a motto of:  Be you, be present, be genuine, and don’t command afraid.

“You cannot escape the responsibility of tomorrow by evading it today.”

Not all leadership decisions have a clear correct choice.  Each option has pitfalls and each option has the potential to negatively impact another aspect of the mission.  But putting off a decision due to fear of failure, or even worse making no decision at all, is a failure of leadership.  Consult peers who have faced similar dilemmas, query superiors who have learned through their own trials (and may even have more information to add to the puzzle), and most of all reflect on the overall goal and direction this decision is going to take your unit.  As leaders, we are not expected to have all the answers, but we are expected to take in the information and make a decision.  So make a decision.  If it ends up being the wrong decision, then own up to it, regroup and move forward.

“If you can’t stomach failure, you will never be a great leader.”

At some point, you are going to fail.  I failed often as a leader and a commander.  But each failure offered opportunities to learn from my mistakes.    I am not saying we should accept failure — accepting and stomaching failure are two different things.  Accept that you will fail and learn from it.  We cannot be afraid to make decisions due to fear of failure.  Fearing failure can lead to being adverse to risk.  Being adverse to risk can reduce your chances of your team achieving success.  Trust your team, allow them to learn and grow.  They don’t expect you to be perfect, but they do expect you to lead.  Sometimes you will be right, and sometimes you will be wrong.  The key is learning from your mistakes and demonstrating to the men and women under your command that you can accept ownership of your failures, correct course and move on.

Choose your battles.  Everything cannot be important all the time and it is your job as a commander to protect your people from that type of leader.  Be selective in your arguments, the projects you task to personnel, and the goals you set for your unit.  At times it can be a juggling act where some of the balls are glass and some are rubber.  If your goals run contrary to those of your boss, it may be time to reassess the situation.  If you fight every battle, you will wear out both yourself and your people.  Do not be afraid to let some of the rubber balls bounce.

Whatever you do, don’t command afraid.  Whether it is your own self-doubt, personal insecurity,  fear that not following the party line will negatively impact your career progression,  or concerns over whether or not you will be taken seriously as a woman leading in a service that is still nearly 80% male (and less than 18% of U.S. Air Force pilots are women), just remember to be you, be present, be genuine and don’t command afraid.

I am a life-long aviator with a military career spanning special operations and combat search and rescue. Together with @milieux01, I am working to advance opportunities for others to join us in the skies. View more posts

One thought on ““Don’t Command Afraid””