The turn of the 20th century was exciting and brilliant with the invention of the airplane.  The idea of flying had only been a dream for inventors and adventurists until December 1903, when three brave and visionary siblings launched their 20 foot by 20 foot spruce and ash built biplane into the sky at Kill Devil Hills in the outer banks of North Carolina.  The courage it took to climb into the homebuilt contraption alone was immeasurable, but in those fateful 12 seconds of flight, The Wright brothers and mankind learned they had new limits to explore.  And so they did. 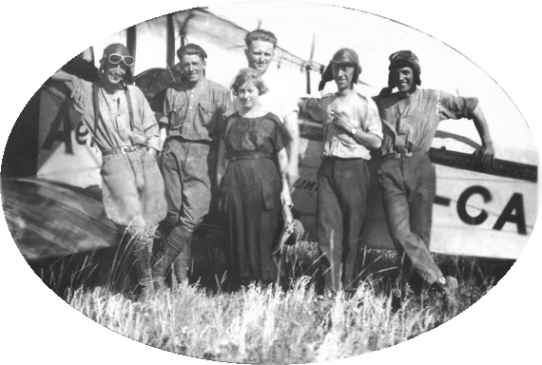 Many people – women and men alike- tested themselves and their own airplanes in this burgeoning field of technology-  from death-defying acrobatic tricks and stunts to distance and stamina tests of machine and person.  And with little (actually no) government regulation, the limits were endless.

One of the more fascinating developments was the art of wing walking.  It’s hard enough for many people today to take off in a commercial jet, seated comfortably in a government-regulated guaranteed safe seat with seatbelts securely fastened.  For those same people, taking off in a small airplane that sounds and feels like a lawnmower is even scarier – so the idea of walking on the wing of an airplane is close to a death wish.  But many people did it at the turn of the century – and some of the most famous of them were women. 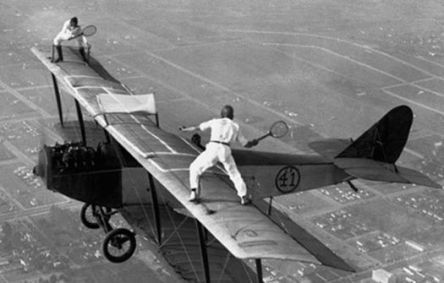 These daredevils tested the absolute limits of aerodynamics by to staying upright on an airplane.  Glady Roy was one of the more audacious in the field, walking with a blindfold on, dancing the charleston, and  playing tennis on a wing!

Gladys Engle demonstrated a mid-air wheel maintenance  capability and her supreme talent by carrying a tire on her back while transferring planes:

Another famous wing walker stepped out onto the wing of her airplane on only her second flight!  Her name was Lillian Boyer – and she quickly became famous for her own stunts like transferring from a car to an airplane and hanging from the different parts of her airplane during flight.

The tenacity and nerves of these women can not be understated – those who fly understand the danger involved in such acts.  We have only mentioned a few of these women, but there were many more wing walkers active in the era.  They traveled from small town to small town between the first and second world wars in traveling groups known as barnstormers and flying circuses.  Raising revenue through crowd thrilling spectacles, the wing walkers were able to maintain their art while sharing their passion with the country.  The accident and death rates from these demonstrations were surprisingly low, but government regulations and the economic depression of 1929 soon led to a decrease in participation and frequency of these events.

Luckily for us, the legacy still lives on.  Kristen Pobjoy, 22, of the AeroSuperbatics flying circus continues to inspire girls and thrill-seekers to stretch their comfort level by flying – or wing walking! 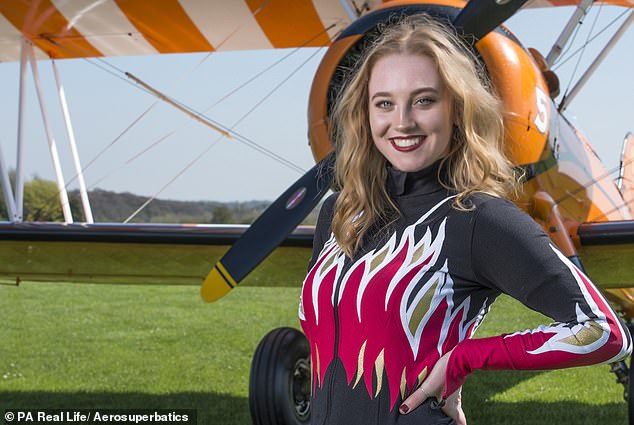 Starting at 14, she was meant for the adventure of a circus and is now one of only 2 full-time formation wing walkers in the world.  She continues to thrill and excite crowds across the world with her strength, balance and courage.

Do you know of any famous wing walkers we missed?  Post them below with a picture or short story!   We are grateful to the pioneers who were brave enough to try and for the women who continue to inspire us with their creativity and courage.

One thought on “Would you walk on the wing of a flying plane?”