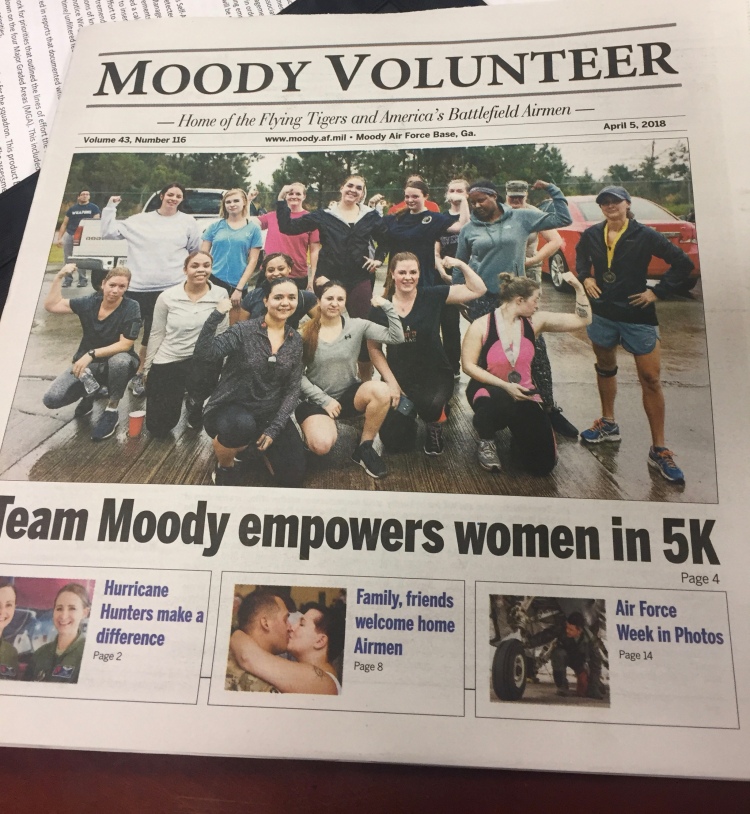 He had just returned from winning the Women’s Empowerment 5K, and everyone was gathered around him to see his medal.  “That’s awesome man”, “way to represent” everyone was proud of our squadron’s winner.  It was great, he ran the race pretty fast and won.  I asked, “were there a lot of people that showed up?”

“Yes Ma’am, it was a great showing for a great cause” he replied.

“No ma’am, but some other senior leaders were out there,”

“Any of them women?”

“No Ma’am,” he replied again, you could see he was puzzled by my line of questions. He started to respond more about the other commanders that were present.

“Interesting, I wasn’t going to run it either….” I paused, then I started with my new idea. “Hey listen” I said,” I have been thinking, I think next year we need to organize a men’s empowerment run”, he raised an eyebrow.

He kind of laughed, “Ma’am, are you joking?”

“No, I’m not.  Do I look like I am joking?”  I could see my point was going to hit home momentarily.   “This is a real thing.  Men struggle every day and I think we need to have a run to show them we are behind them and support them.  Would you lead it?  I think it’s only appropriate a man do it since men understand the struggles other men are going through”

Our “first shirt”, the administrative leader of our enlisted core started to laugh and said he was leaving.

“No shirt, I need you to stay right here”

He laughed and continued to the door, “I can’t stay here for this” he said.

“Stay here for what?” I asked “I’m serious, I’m not asking you to stay,  I need you to understand this.”

By this point, the laughter and chuckling started to subside.  They thought I was being funny but they just couldn’t tell how yet.

“Do I look like someone who needs empowerment?” I asked them.

“No” they all replied

“Then why are you running for my empowerment? And how is a run supposed to help if I wasn’t?”  I asked.  Everyone stopped.

“Our Wing Commander, the highest ranking person on this base is a woman and the entire base just held a race to tell her they need to empower her.  The wing commander!  And me, and all the other women.  Airmen were running for my empowerment.  Does that sound crazy to anyone else here?  Could you imagine if the WG/CC was a man and held a men’s empowerment run?”

“Think about it,” I said, “what signal are we sending young women right now?  We have a female wing commander and we just held a run that told girls they are so disempowered that we have to run a race to support them.  That even our Wing Commander needs empowering from outside sources- from the men she leads even -because she does not possess power as a woman. Doesn’t that sound crazy?  Now, do you think I am joking?”

No wonder we have the problems that we do.  And it’s not men who are driving this crazy train- it’s WOMEN.  But men are right alongside us cheering us on – to “make it” in a “man’s world”.  Ladies, it’s never been a man’s world, it’s our world together.

I have been fighting this battle for years now, the idea that somehow my gender puts me at a disadvantage.  TV, commercials, magazines, politicians, radio stations spit out this propaganda and we buy it.  Hell, I used to buy it and worked my butt off as a mom and a wife and a pilot and an officer and a !  Ugh!  It’s exhausting.  What are we proving?  And why?

We all so conveniently forget strong women when we want to claim women need empowering.  It frustrates me that strong women of history are lost in the milieu of this social conditioning.  To believe that we need a run for women’s empowerment is to believe women are not empowered.  But it is not about power.  Women contribute just as equal as men, even more sometimes, I would suggest.  But social conditioning teaches us that women are victims and need empowering, it is such a strong message that after you think of it this way, you realize you thought the same way.  This is the gender role bias.

There are issues in our society that surround women.  But it’s not that we need empowering.  We need memory.  We rarely quote or cite women doctors, scientists, philosophers or theologists from history.  Their contributions are not as powerful because they are women and it is tragic.  Both men AND women discount these historically important women.  But it’s our duty to remember them, include them in our culture, and learn from them in our journey to understand and embrace the power women already possess. If we don’t, we are contributing to our own repression.  What we have to remember is that we are all necessary for the functioning of our society- like the organs of our body, each are different, but each are equally important to the functioning of a healthy human.

Society teaches and reinforces obedience and thought control in young girls starting in school- we teach girls that they have to be prettier and quieter and smarter than boys (and each other).  We reinforce this with obedience badges and smiles and hugs for doing well, and shame and disconnection when they don’t.  We brainwash these young girls and then have the audacity to tell them they are the root of what we call “the feminization of our school system”- blaming the same girls we are brainwashing in school for an overly structured school system while grown women organize events centered around some sort of undefined and unachievable equality.

We are going around in circles and losing.

And so on this day, to point out the insanity, I want to organize a men’s empowerment run.  Because men are no longer allowed to be men, they are being socially conditioned to be some sort of half men.  They can’t ask us out on dates or be friends with us, help us with groceries or open the door for us without some kind of shaming.   And they have no idea how to handle this undefined inequality.  What inequality?  If we listened to societal messages, not only are men hyperaggressive and poised to rape anything that comes within their reach, our courts tell them that they are unfit to be fathers to their kids.   We are celebrating the Beta Male and women are claiming to be “the men they want to marry” as a victory of something I don’t understand – demanding CEO status in order to be considered equal all while we have empowerment runs for really no reason at all.   Think about it.  Women are already very empowered.  We just don’t own it.

Equality and empowerment are false idols that women chase and they have nothing to do with how we interact- at least, these ideas shouldn’t shape how we interact.  We are already equal. If women continue to chase something that can’t be given from others- like equality and empowerment- women will continue to be at a disadvantage.  We really must start now.  People are making money over this false victimization narrative, #metoo and #timesup were schemes meant to collect money for some to get richer while providing no avenues to increase agency for our girls.  These initiatives gave us all a sense that we were doing something to help girls and victims by contributing money when really a few profited off of fear mongering and man shaming.   It’s really destructive.

Women bring so much to the table, it is our duty to stop being scared of our power, and instead, own it, to teach it to our girls.  We have to change the system to make it ours, instead of trying to fit into something that we didn’t create.  It’s up to us, as women, to be equal and empowered.  No one can give this to us but ourselves.  And the crazy thing is, all we have to do have to do is show up.  That’s why the “Men’s Empowerment” run is so funny, because that’s all men do- is show up.