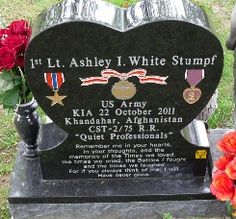 As the argument continues on whether women belong in combat (the irony that we are already there is not lost on those of us that have been already), a book was published called Ashley’s War, The Untold Story of a Team of Women Soldiers on the Special Operations Battlefield, By Gayle Tzemach Lemmon (2015).  If you have not already, please read it.  The book captures the heart, determination and authentic capability of our women soldiers who are ready to serve in the Army’s toughest combat scenarios.  So ready were the women chronicled in this book in particular, they were willing to give their life for the opportunity.   1Lt Ashley White, along with two other Rangers, lost her life with the 2nd of the 75th Ranger Battalion on this day (22 Oct) in 2011.  She will not be forgotten.

Since the ban on women in combat was lifted in 2013, many services have taken longer than expected to determine how women should be integrated.  Believe what you want, but I personally think this delay is perpetuating myths that put our young women in danger- reinforcing beliefs among both men and women that women are somehow handicapped or too weak to perform like men.  Many in our society believe women would be a liability in combat (though technically the argument should be that we “are” a liability because we are already there- but we aren’t a liability as it is so we won’t be a liability in the future), that including both genders is a “social experiment” that would hold “all-male” units back. One most outspoken is Lt Gen (Ret) Jerry Boykin, citing uncleanliness and privacy as main reasons why women should not be treated equally.  I, personally, am offended by this argument and I think many women feel the same.

What is lost most when we suggest women don’t belong in combat, when they are already there, is the benefits of being legally “allowed” in combat.  Without legally sanctioning women as combatants, women cannot get treatment for Post Traumatic Stress Disorder, we cannot claim combat on our military records, we have no rights to several VA programs available to our male peers because we have never “been in combat” as well as many other things our society takes for granted that only men get for their service.  There are very few services for women veterans, a huge disparity exists between the way male and female veterans are treated.  Worse yet, our families and spouses are not given the same support and respect as those of our male peers who are “legally allowed” in combat.  The layers of mistreatment and inequality run deep.

Unlike Lt Gen (ret) Boykin, however, Admiral (Ret) Eric Olson (SOCOM), Gen (Ret) Stanley McChrystal and Admiral (Ret) William McCraven knew and saw the advantages of having women on their Special Forces teams in 2003, when untrained female soldiers were asked to take time from their primary duties (cooks, supply, etc) to assist at night engaging local women during SF raids through Female Engagement Teams (FET)- significantly increasing intel and safety for their operators.  They knew the importance of this role and wanted to reinstate the program.  This time, in 2011, they wanted to do it right.

So the generals asked the lawyers to find a way to let women on their SOF teams and after some consternation, came up with the “Cultural Support Teams” or CST for short, a concept of women “enablers” (not operators) that would “assist” the teams on missions.  Hundreds of women volunteered from various facets of the military – Active Duty, National Guard and Reserves- all who had been craving an elite challenge like this all their careers.   These were women who hungered for the opportunity to compete and serve in the far more exciting roles of hand to hand combat they had imagined they would be involved in when they joined the military instead of the mundane desk jobs they had all been forced to take due only to their gender.

They were given physical tests up to SF standards and those that failed were sent home.  Once they passed the minimums, they went through a grueling condensed version of the Ranger and the Special Operations pipeline, learning teambuilding, problem solving, medical skills, shooting, moving and above all-patience and resolve.  These women showed their tenacity and strength- eager to have the opportunity to serve at the tip of the spear and hell-bent on not screwing it up.

After training, the women were assigned across Afghanistan to “assist” the Ranger and Special Forces teams.  Never were they allowed to wear the badges or consider themselves actual special operators- but they were in all aspects warriors and elite forces.  The men they served with recognized that.

1Lt Ashley White was just one of these women.  One who could climb ropes in full gear countless times over, who could run faster, do more pushups and still bake better cookies than many of her male counterparts, all while doing it with a smile on her face.  She was a leader and a pioneer.  Courageous and patriotic.  She is just one example of a woman, when given the chance to compete, outshone anyone’s expectations.

I respectfully disagree with Lt Gen Boykin that we are only now socially experimenting with women in combat because we are lifting the ban.  In reality, the American people and Department of Defense have been socially experimenting with women in combat for centuries without giving us credit for our accomplishments or protection from our disparagers.  Instead we have been asked to serve, to live in danger away from our families, to respond willingly to our nation’s call which we have all done faithfully, without the recognition of our service on any level all while being told we don’t belong there.  While we have done this for years without recognition in hopes that our performance and tenacity would demonstrate our value and worth, we still find ourselves being accused of being “handicapped” because of our gender – without being given the chance to disprove it or recognized when we do.

This is a shame on our society.  These young women deserve our gratitude, our respect and the recognition that they showed up to the challenge and asked nothing in return- except the opportunity to continue serving.

There is no reason women cannot be in special operations.  And there is no reason that women should not lead our troops or our nation.  The only reason that should keep us from doing these things is if we, women, don’t exist.  We cannot fight a war “Half-Hearted” we should not live in a nation that is “Half-Hearted”.  It takes all of us using our gifts as God intended in order to truly make our nation stronger.